Skip to content
Before the boys, we talked about the possibility of adopting black children.  We knew we didn’t care, on a personal level.  But, we worried about how society would react and, if it was a girl, we worried about how we would do the hair.
When the call came about the boys, we instantly knew that, no matter what, we wanted them.   We also joked that the hair would be easy since they were boys.  And hair care was fairly simple, before our Lizzie came along.
We were so paranoid, at first.  A week after getting the boys, we were going to meet with our current landlord about renting his house.  We asked my niece to babysit because we were afraid that he would have an issue with us having black children.  Looking back on it, that seems so ridiculous, but, like I said, we were paranoid.  Of course, he eventually met the kids and thought nothing of the color and thought it was wonderful that we adopted them.
So, we moved our boys into a very white area.  That wasn’t our original plan, but here we were.   There are very few black children in William’s school (currently only one other black child, in his grade).   And, definitely no other trans-racial families.  It was a little freaky.
Since then, I have learned that people are afraid to point out that the kids are black and are sometimes, uncomfortable, when you do.   But, at the core, most people don’t care.   I used to think that people were staring at us.  They were and they still do.  But, what I’ve come to understand is, they are curious, not judgemental.  Brian and I are white and we have 3 black kids.  And, yes, it is odd.
We don’t get the confused stares in our area much now because everyone seems to know who we are.  We definitely stand out.  We joke that we’re local celebrities.  Cashiers will comment on how big they’ve gotten.  Random people at the park will talk to us because they recognize us.  On a very small scale, I get what it must be like to be an actual celebrity. (I have even found myself fixing my hair and make-up before going to the store, in case I’m recognized…lol)
So, back to the hair.  With the boys, if I just asked the stylist to cut it really short, it worked out ok.  And, it would look pretty good for a few weeks.   But, then came Lizzie.  Since then it’s been a learning process.   I have received so much advice from random black women that I’ve encountered.  The first question is usually, “what are you putting in her hair?”  I’m grateful for all the advice.  But, I still don’t know what I’m doing.  Well, I know what I’m doing, I’m just not doing it what I should be doing. ( :  This is evidenced by the woman who recently offered to braid Lizzie’s hair (after stopping me in a parking lot) and the cashier who wrote down some moisturizer names while I was checking out.  I find this kind of hilarious in a bumbling white-mom-kind-of way.  But, Lizzie’s hair still looks kind of bad.
All I can do is continue to try different conditioners, moisturizers, oils, etc, and keep putting in the clips and the headbands.  All the while, I’m hoping she’ll figure out how to do her own hair, at a young age and that she’ll forgive me when she looks back at her pictures. ( : 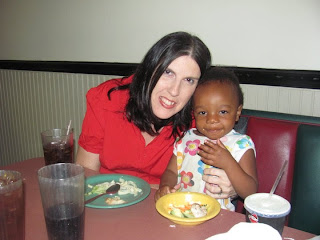 In the end, there are many things to learn when you adopt out of your race.  I have learned that people are pretty amazing, that it really is hard to do the hair, and it’s all worth it.  ( :

24 thoughts on “How not to style a black child’s hair.”