Skip to content
Sometimes, I wonder if I have such a fascination with color coordinating and matching my family because we don’t match.

And, I do enjoy the fact that when we are in costumes, everyone knows that we are together.  When we are in matching costumes, it is convenient.  There is no getting separated in a crowd because it is obvious that the kids should be with me or Brian. 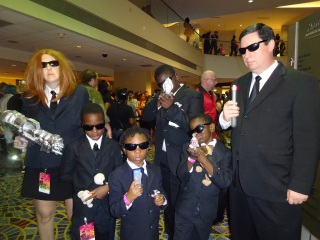 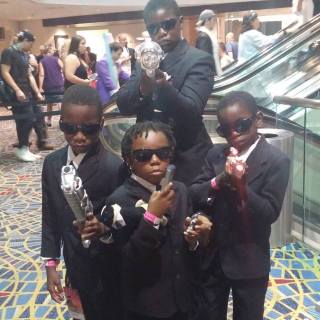 But, really, I don’t care.  I honestly don’t think about the fact that I’m white and they are black.  It seems so natural to me.  Almost more natural than families that are all one color.  Occasionally, I get a pang when I hear people gush about how other children look like their parents.  But, it passes quickly.  And, since I have a fairly low self image, I don’t really think that I would want my kids to look like me.  haha. They are beautiful, so beautiful.  And, because I had nothing to do with that part, I can say it without sounding too conceited. haha.  Ok, maybe a little conceited. 😉

But, you know, the interesting thing, the majority of the time, people (adults, at least) know right away that I am their mom.  There is rarely confusion about my role when they see us interacting.  Cashiers, for example, refer to me as mom without hesitation.  That makes my heart happy.  They might not look like me, but still they are clearly mine.  I don’t know how they know, but they do.

I mean, sure, I have had to clarify it, on occasion.  It’s confusing when we are not literally together.  Like, one time, when I went to a school event and encountered someone who actually didn’t know me.  Or, one time, when I was waiting for Antwan outside during a kids’ library program and the librarian came out and stared at the group of parents, looking for a black mom.  Or, one time, when I had to do a pick-up after a church youth night and the volunteers didn’t know me.  I finally said the black kids were mine.  I don’t like labeling them as the black kids, but we live in a very white area and if they are the only black kids in the room, it seems silly not to expedite the process by identifying them that way.  But, then, of course, everyone gets uncomfortable because you can’t say that people are black….

But, back to my point!  When we are already together, it’s usually pretty clear that we are a family.

Last weekend, at DragonCon, my belief was validated, in a weird way.

We were at a hotel.  A hotel that had terrible customer service, but that’s a whole other story.  We were trying to take advantage of their complimentary breakfast, but Antwan and I were totally stumped by the waffle maker.  (Hey, we’re smart people, but those waffle makers are TRICKY! haha).   It didn’t want to flip over and because I was afraid to break it, I asked for help.

Ma’am comes over, flips it over effortlessly, and walks away.  (Don’t you love it when that happens?)

I ignored the fact that she was rude and laughed at my inability to flip a waffle maker.

Really, this has nothing to do with the story, I just want to complain about the crappy customer service at the Residence Inn.  But, we’ll call it, setting the scene. 😉

So, Antwan and I sat down as a little girl (black) walked up to get some food.  The same employee turned to us and bellowed, “You have to watch your kids up here!”

I responded with clarification that I had my kids.  She was so rude (and the fact that she snapped at William, a few minutes later, for no good reason, suggested that this was her go-to tone).  But really, I was amused.  I had experienced explaining that my kids of another race are, in fact, mine, but never had it been assumed that all random black children were mine.  Especially since that particular part of Atlanta, Georgia is NOT a very white area and Brian and I were most likely the minority in that room (I didn’t count.).

You could make a case that it was a racist assumption, maybe.  I’m really not sure.  She was a black woman yelling at a white woman to watch a black child that wasn’t in fact hers.  I don’t know what you do with that. 😉  Either way, I do like the fact that someone else didn’t think it was weird that my kids are black because, as we all know, it is getting more and more common.

I also like the fact that I could say that I was watching my darn kids, lady.  They were with me, right where they belong.

We ate our last breakfast there (settling for less confrontational pop-tarts in our room, after that) and went and put our Jedi attire on.  Because Jedi stick together, no matter what color they are.  And, they don’t eat waffles, anyway. 😉 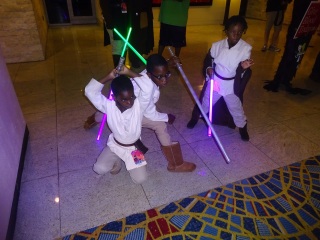 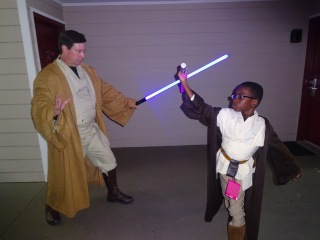 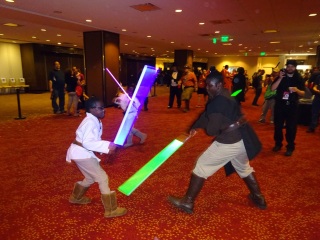 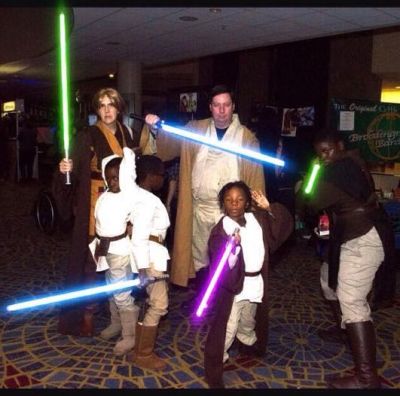 23 thoughts on “Matching My Kids”

How’s that for some Sunday wholesome?
If you know you know!
Fun little transition courtesy of @sewgeekmama !
I’m not saying that the idea of meeting #steveBurns at #megscon was the reason that I finally went back to the gym but I’m not saying it wasn’t …🤪🐶
Talky Toaster is by far the silliest cat we have ever had (and we have a lot to compare her to!)
This little nugget is 16 today!! I absolutely can’t wrap my mind around it. Happy birthday, Antwan! We love you so so much!