Skip to content
A handful of weeks ago, (has it really been that long??), we found ourselves at the hospital with William.  My experience with hospitals is limited.  I had a hernia operation when I was a kid but most of my memories involve me grossing out my friends by showing them my incisions. I also remember my mom surprising me with hand-made stuffed animals to distract from my fear of needles when it was time for the I.V.  (Side note, I love my mom.  And my Dad! He doesn’t crochet but he gives awesome hugs!)  I have visited a few people who had babies.  But, that is a different hospital all together, figuratively speaking.

This time, I was signing William into an emergency clinic and then later following an ambulance to the hospital/his home for the next couple of days.

It all started when I observed William randomly fall a couple of times during the afternoon.  I didn’t think too much of this because despite the fact that we are not genetically related, he has inherited my clumsiness.  Not long after, I went to do a drop-in pet visit (if you don’t know, I’m a pet-sitter.)  When I came back, he was “off.”  He said he had a headache and when I tried to give him Ibuprofen, I really saw how off he was.  He couldn’t get the pill into his mouth and he kept spilling the water.  He was getting less responsive and I was caught between the feeling that I needed to take him somewhere and the equally strong feeling that I didn’t want to spend hours in an emergency room if he didn’t really need to be seen by a doctor.  Was he tired?  Was he faking for attention?

When I got Brian involved, he said he should go to the doctor but he was mostly suggesting it to give me piece of mind.  It didn’t take long for us to both know that we made the right choice.  William soon became like a different person.  It was like he had a stroke or suddenly developed a brain injury (I kept re-playing the falls in my head to try to remember if he had hit his head.)

He was uncooperative with every test that they ran.  He cursed a lot.  He totally freaked out when they did a cat-scan to the point that they had to put him in restraints.  He had hallucinations/delusions.  But, they did manage to run the tests and everything came up normal/negative.  We asked him a million times if he had taken something or if someone had given him some “candy” that he didn’t recognize.  Both the tests and William said no.  I was terrified that he had some sort of psychotic break and that the William that I knew was gone forever.  And, at that moment, all I wanted in the world was to be home arguing with him about doing chores.

No such luck.  Instead, sometime around midnight, we were transferred to the hospital and I was soon (Well, not soon, nothing happened quickly.) following an ambulance on the longest drive of my life.

So eventually, Brian and I found ourselves in a hospital room with William.  Waiting, just waiting.  We agreed that when the doctor came, I would head home so I could take care of the animals, take the kids to my parents in the morning and then head back.  Little did we know, the doctor wouldn’t come until 4am.  We explained everything to the doctor like we would about a million times over the weekend to different doctors, he checked vitals, said something or other (I really don’t remember now) and he left.  I went home, spent half an hour updating people and went to sleep (kind of).  I got up an hour later and worked my way back to the hospital.  It was insanely hard to function on an hour of sleep and I am exhausted now, just writing about it. haha.  But, I got through.

We spent the day explaining things to different doctors, learning that more tests were normal, and watching William come out of it (whatever it was) more and more.  He was very quiet and lethargic  but he knew who he was and where he was.  He had no idea how he got there, though.

Meanwhile, Brian was amazing.  If anything good came out of this, it was a reminder of how much Brian loves his kids and how good he is in these types of situations.  When I sat there, unsure of what to do, Brian just did it.  He kept him as calm as possible, cut up his food, made jokes, etc.  I felt paralyzed by my fear.  I held my own; I don’t want to imply that I was in a fetal position in a corner, haha, but he really was very impressive. 🙂  And our friends and family were just as impressive.  My parents and sister covered Lizzie and Antwan,  Kaleb covered the animals, although it’s possible that he complained a little. 😉  Family and friends checked in, visited, etc.  It’s awfully nice to know that we are not alone.

By the next day when he was discharged, after MRI’s, blood tests, examinations, etc, etc; he was practically normal.  They never figured out what it was (the leading theory was that it was stress-related).  But, they did find other medical issues that I need to follow up on.  For example, my son has an abnormal sacrum (tail-bone area)!  Who knew?? So, anyway, the beginning of our summer is going to be filled with doctor appointments. Yay! 😉  Truth be told, though. I’m looking forward to it.  You know, taking steps to make things better for him and what not.

So, about a week later, he was back to his recent jerky, teenager ways.  I was just devastated.  All my efforts to create a calm, less stressful environment seemed futile.  Letting the small stuff go seemed pointless if he wasn’t going to.  Finally, one day, Brian, William and I had a talk.  (Not to suggest that we hadn’t talked before but this felt more productive.) We started with emphasizing that I am the mom and therefore I get to make the decisions. So while he might not agree with them or I might even be wrong, his current method of yelling, refusing to comply, and slamming things was not an allowable response.  I kept asking him what is wrong?  What is really wrong?  He kept saying nothing.  I kept reminding him that he accused me of never sitting down and talking to him and then pointing out that I was in fact sitting down and talking to him.  And he kept saying nothing.  Finally, we learned a couple of things.  He feels unwanted and un-needed.  This is no great revelation but it’s still true.  And sad.  He also said (after some good old Emily prodding and maybe some dramatic “Just tell me! Why are you so mad at me???”) that he’s not really mad at me.  He’s just already mad and whatever I happen to do (justified or otherwise) that upsets him, sends him over the edge. I thought I was very clever when I asked him if he was like the Hulk.  Cause, you know, that’s Banner’s secret!  He’s “always angry!”  On a side note, I watched The Avengers last night. 😉   Anyway, he wasn’t impressed with my analogy but I sure was.  Either way, I was glad that his anger directed at me wasn’t really all about me.

So things have been a little better since then. He’s been a little more cheerful, communicating his feelings more, and he’s been better about keeping the anger in check, especially when reminded. I’ve done a little better about letting the small stuff go.  But, seriously, how hard is it to pick your underwear up from the bathroom floor??  😉  I think we’re both trying and that’s really all you can expect from anyone, right? 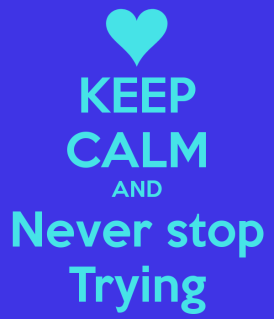 One thought on “Hospitals Have Great Mashed Potatoes But I Don’t Want To Go Back.”