Skip to content
So, I was at little Walmart as we call it.  (The one with just the food.)  It was an uncommon solo trip and as I was minding my own business, scanning my items, I looked up and I saw it!  A mirror!  An unforgiving mirror staring right back at me.  I was already aware that I wasn’t my most glamorous in a grocery store check out line at 8:00 at night.  But, I had proof.  And I didn’t like it.

I soon realized it was probably a camera.  A camera actively recording me as I purchased my pop-tarts.  I don’t know why the camera had to double as a self-esteem zapper but there it was.  I found myself taking my hair out of my ponytail holder and repeatedly looking up to confirm that was really how I looked.  Haha! And, as I was leaving, I told a couple of employees that I was going to have to put on more make up to come shopping now.  They didn’t laugh as much as I thought they should.  And after confirming that it was indeed recording me, I told them that next time I shopped, I would have my hair done and my face all made up for the check out line!  They laughed but there’s a chance that they were just hoping I would leave.  And they knew as well as I did that I wouldn’t have my face and hair camera ready next time. 😉

As I was driving home, I did what I usually do.  I thought about telling the kids of my adventure.  And I realized that they would have a different perspective on the whole situation.  They would think it was awesome.  Especially since there was also a new corded scanner.  You know, so we could scan our cat food and 24 can Mountain Dew without taking them out of the cart.  That, I like, by the way.  But, by the time I got home, I was in the throes of trying to get them settled into bed and didn’t remember to tell them of these exciting and depressing changes. Until we went back to the store.

Then they were surprised with it.  And checking out was way more fun that usual.  And it also took 4 times as long.  haha.  But, thankfully, I wasn’t in a hurry…this time.  (Next time might not be quite so festive!)

It wasn’t exactly a free kid activity and I’m not sure I can count it as homeschool learning.  After all, they already knew how to pose for a camera and spend my money.  But, it was definitely fun and (probably) worth being forced to see myself in all my supermarketing glory.  haha.

I guess the moral of the story is, don’t forget to find the fun. 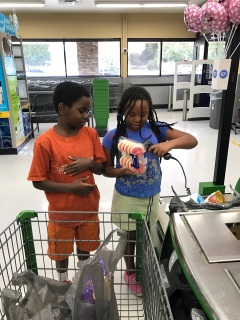 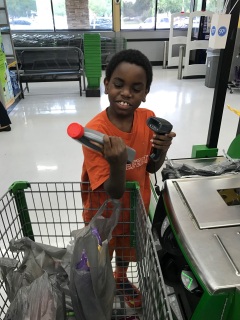 I’m not saying that the idea of meeting #steveBurns at #megscon was the reason that I finally went back to the gym but I’m not saying it wasn’t …🤪🐶
Talky Toaster is by far the silliest cat we have ever had (and we have a lot to compare her to!)
This little nugget is 16 today!! I absolutely can’t wrap my mind around it. Happy birthday, Antwan! We love you so so much!
Finally one I relate to. 🤣
Sunday morning
When you’re son cleans his room and you get the answer to the question of “where the BEEP did all of our silverware go??”