I don’t generally like change. Or change that doesn’t involve chocolate or a new pet, anyway. But, the last couple of weeks have been full of change.

After a lot of soul searching and discussing (some might say that I nagged), we made the decision to send William to a very small k12 private school. The thing about this school is that it’s on the westside. And we are not. We are about 45 minutes from the westside, actually. But, after learning about the school’s small class size, individualized learning options and familiarity with kids with special needs; it seemed worth the drive. I also love that the school is more diverse racially and that a teacher and the pastor have both adopted from foster care (one of them transracially like us). All these things convinced me that it was worth driving him across town for their “new beginning.” (That’s the name of the school, by the way.)

As you can imagine, William was not happy. He didn’t want to leave his friends at public school. But, sadly, after a year of different behavior issues and lousy grades, he didn’t really have a lot of room to complain. Not to suggest that he didn’t, haha.

So he went. He had a way more positive attitude than I expected and even cooperated with a first day picture! 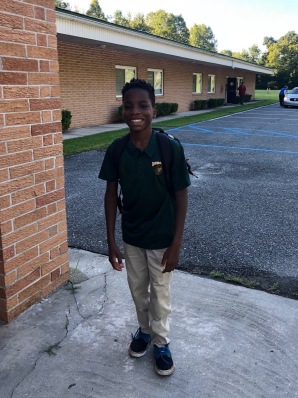 And his first week went well despite his negative opinion of this life change.

We learned a couple things. He looks spiffy in a uniform; even if he didn’t want to wear one 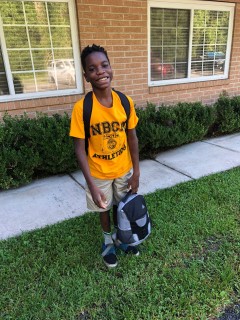 And we learned that despite their typical private school rules, they were willing to be flexible at times; like when your kid shows up with no shoes, for example.  Because on the third day, William  announced that he didn’t have shoes when we turned on the road to his school. Embarrassed, I went in and asked what their “no shoes” policy is. They took pity on me and said he could come in since he had socks and we live so far away. Naturally, when I went back to the van, I discovered that he was in fact not wearing socks, either. I woke up the sleeping Antwan with “Antwan, give him your socks!”  To Antwan’s credit, he did, right away. Antwan later said that he was too tired to argue, haha. 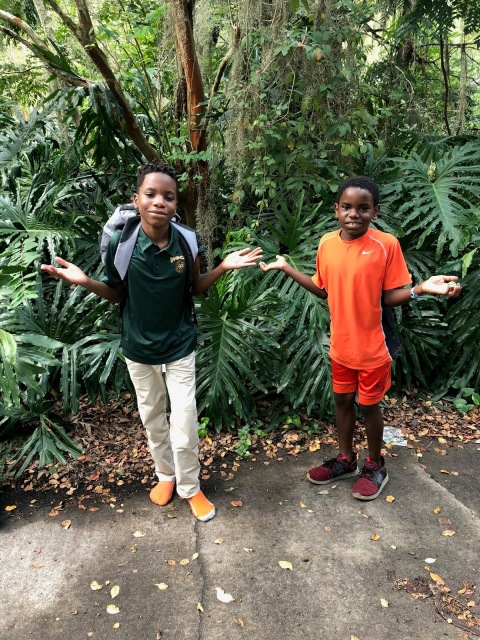 That was Wednesday. Friday, he didn’t grab his lunch box and I had to call and ask them if they would feed him. They assured me that they would give him pizza and I assured them that I would bring pizza money when I picked him up.

Meanwhile, we were thinking of sending Antwan and Lizzie, too. Antwan misses school and I think Lizzie could benefit from someone else teaching her. Where as Antwan is academically motivated, Lizzie would rather focus on the animals….and so would I. 😉  Anyway, William was able to get in on a different scholarship, but we are waiting on financially based scholarships for them.  Because even the cheapest private school in town is still a private school. After being waitlisted due to lack of funds on their end and having to reapply elsewhere; we found ourselves with a 10-12 week wait. (It’s been 3.)

Also, meanwhile, I started casually looking for a job. Feeling painfully aware that we really need to bring more money in, I sent out a few resumes. When I got a call back the very next day after sending out my first, I had to face the fact that it might actually happen and before I was ready. And before I knew it, I found myself interviewing for a few different jobs in the non-profit world. They were all intriguing but one stood out as the best fit. Thankfully, they agreed. 🙂  It should have been obvious that I would end up there because it is located across from one of my all time restaurants, Beach Road Chicken. I joked to Brian that it was fate. And when I walked in for the first interview and was greeted by an office dog named Mischa, I couldn’t hide the crazy dog lady inside me. She obviously sensed it too because she sat by me and “let” me pet her while I interviewed. It’s no wonder that it went well. 😉 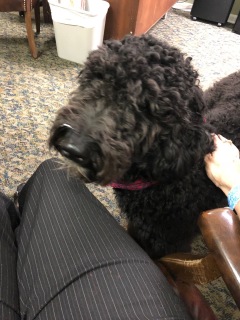 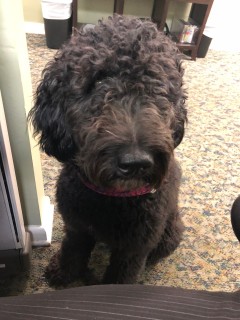 Anyway, I left there, feeling good and a few days later, as my son was eating “I’ll pay you later pizza,” I went in for a second interview and was offered the job.

I have a lot of mixed feelings about going back to work but I’m going for it. 🙂

So, William is in a new school and I’m in a new job. Lizzie and Antwan are still technically homeschooled until the scholarships come through.  This means two things. One, I didn’t plan this well and two, for the next several weeks, I’ll be begging my family and friends for help with them.  (If I have your number, you might want to start ignoring my calls, haha). And, poor Brian’s days off just got a whole lot busier….

I guess this is officially a new chapter in our lives. Hopefully, it’s a good one. 🙂