Skip to content
I’ve come to accept and expect comments and questions from random people.  Generally, I don’t mind.  I feel that it’s kind of my job (and an opportunity) to educate; just as much as it’s my duty to make people aware of the need for adoption.  But, on occasion, it can get a little tiresome.  We joke that we would make a great reality show because of our unusual and wacky little family.  But, the fact is, when I leave the house, I feel like I am in a reality show.  People notice us, probably more people than I realize.  They observe my parenting, the kids’ behavior, and, of course, take note of whatever superhero shirt I’ve dressed us all in that day. 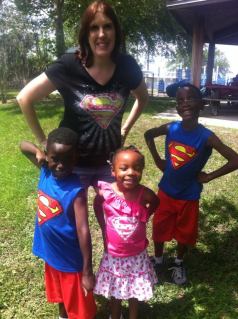 But, this is our life and, like I said, I’m ok with it.  I wouldn’t change my unusual, wacky, little family that fascinates nearly everyone we encounter because I really do understand.  My kids fascinate me, too.

But, every once in awhile, someone really surprises me.  Someone breaks the mold of the innocently curious.  Last week, we encountered the nosiest Taco Bell employee in history.  If I didn’t know better, I would tell you that she read my blogs and made a mental list of what not to say to me and then thought, what the heck, and said them, anyway.


As we ate our tacos, a 20-something Taco Bell employee walked by and said to us – “Are you guys running a day care?”

It sat there, in the air, for a second.  I have to mention that Patrick had just gotten in town for a visit which meant our theoretical day care would serve a 4 year old, 6 year old, 10 year old, and 13 year old?  So, that would be the oddest day care, ever.

As, I looked at her with confusion, Brian, good-naturedly, said “No, this is the family.”

And, she went away.

We agreed that it was weird and went back to our tacos.

She came back, apologizing, “I was just joking.  My coworker said I was rude and that you might have adopted them.”

We confirmed that we had adopted them.  Neither of us saw the point of clarifying exactly what Patrick’s current relationship to us was.

She told us we were nice and asked if they all had the same parents.  Determined not to give up the title (and more than a little desperate to get back to my Loco Taco), I said, “Yes, us.”
But, then I clarified, “But, yes, they are all biologically related.”

Then, she asked if I wasn’t able to have kids.  Keenly aware, that my kids were being sent a message that they were second choice, I said “Not biologically.  But, I believe that this is the way that I was supposed to ‘have’ kids.”   (And, I really, really, do believe that.)

She then told us that she was 4 and 1/2 months pregnant with a little girl and she was so excited.  Apparently, trying to relate, she said that her baby was going to be half-Mexican because her boyfriend is Mexican.  “But, she’s going to look mostly white because my boyfriend is light-skinned.”  What a relief?

And, after spending a few more minutes, discussing how nervous she was about childbirth as I responded with reassuring statements, she finally went back to work.

None of the kids said anything.  Patrick had just gotten an extreme example of what it can be like for us, but he made no comment.  Brian and I shook our heads.  And, I finally got to finish my taco (priorities).

It was random and inappropriate.  I was too shocked to be offended; even though, the whole conversation was pretty offensive.  But, it’s also par for the course.


So, to you random people who I see around town, if I could ask you one thing (ok, maybe a couple of things), it would be this.  Ask your questions.  I’ll answer them.  Just please don’t say anything to make my kids feel less than.  And, don’t say anything to make the sensitive Emily feel less than.  I.E. Don’t ask questions about their biological parents, just ask if they are biological related.

If you follow these guidelines, I’ll happily answer any question that you want to ask me; including the ever-popular “What are you using on your little girl’s hair?  You know that you have to use grease everyday, right?”  😉

I suppose, that probably would’ve been more effective if the random people who I see around town read my blog.  Let them know, ok? 😉

42 thoughts on “Are You Running A Day-Care?”

I say #buffythevampireslayer.
Twinning with my big sis last night! Thank you, Mark Polanis, for the yummy dinner and the fun!
Dad jokes with dessert!
Burgers, fries, and one scary mascot! Still yummy, though!
Honeysuckles. Bee approved!
Cat squad.