Skip to content
Because, apparently, I was only thankful for two weeks and no one can accuse me of not following through…  (Oh, wait, lots of people can accuse me of that.)  Anyway, I wanted to finish up my “thankful” November blogs.  It’s November somewhere, right? 😉

I’m not going to try to go day-by-day because, well, that would be crazy.  So, I’m going to just semi-randomly list some stuff (13 days worth, to be exact) that I’m thankful for.  It might actually all be from today or from 1999, but I’m going to pretend that I was thankful for them in November.  (I’m sure that I would’ve been!)

1. I’m thankful that I found the last chocolate pop-tart that had fallen out of the box.  (Yes, this is a theme with me.  I really do need to organize that pantry.)

2. I’m thankful that there are cows outside of my office.  Because cows are cool.  And, it’s hard to be grumpy when there are cows nearby.  It’s also hard to focus.  But, come on, cows!  🙂 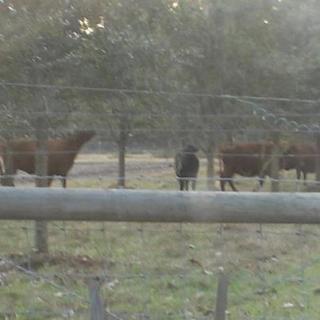 3. I’m thankful that when I paid the cashier for my gas, then merrily drove away without actually pumping the gas; I was able to get it when I came back.  It’s possible that this has happened before.

4. I’m thankful that my job is awesome and that it challenges me mentally and fulfills me emotionally.

5. I’m thankful that William enjoyed his 10th birthday.  I’m bewildered at how he could possibly be that old already, though!

6. On Thanksgiving (and every other day) I was thankful for my kids, my husband, my parents, my sisters, my nieces and nephews, my friends, etc, etc.

7. I’m thankful for my kids.  I know that’s repetitive, but I’m just really, really into them. 🙂

8. I’m thankful for our new dog, Rose, and the fact that she hasn’t chewed up anything in the last 24 hours.    (Although, the day is young…)

10. I’m thankful that my secret santa got me this adorable reindeer. 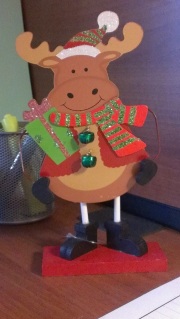 11. I’m thankful that I have a “pet” opossum that has been having dinner with the cats lately when I feed them outside. Yes, I know that I’m not supposed to be happy about this.

12. I’m thankful for my dear friend, Jennice, who has taken on the role of volunteer nanny as I figure out how to juggle my new working-mom schedule; in addition to her already-established roles of god-mother and honorary aunt.  The kids love her and she loves them.  You can never have too much of that. 🙂

13.  I’m very thankful that people actually take the time to read my blog!  Thank you so much!

2 thoughts on “Being Thankful, eventually.”