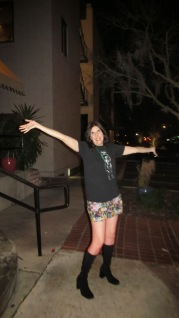 Then, Sunday, since Brian was nice enough to request the day off, we went to the zoo. And, since my sister and family also have passes, they came, too. 🙂 After the zoo, we stopped by my parents for dinner. My parents are great, by the way. My mom changed her whole dinner plan when I texted her about stopping by. And she even bought birthday cupcakes! 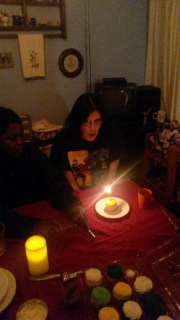 So, all in all, a really nice birthday. So, despite the fact that one of my presents was a new-to-me mini van, I didn’t have time to dwell on turning that icky age that I refuse to say out loud (sensing a theme here?). 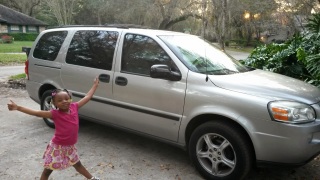 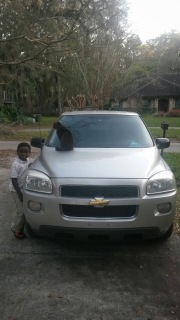 I just focused on enjoying my family and friends and thinking about how lucky I am.

I didn’t find out until the next day that I had gotten the best present of all and didn’t even know it.

Before my sister and her crew left, I made sure to get a picture. It took a few minutes and some prodding to get everyone to look at the camera (of course, in the end, they didn’t). But, I got a picture. I didn’t even look at the picture because I knew that I would be tempted to make everyone pose again if it wasn’t good. And, it was too late in the day for that. In hindsight, I wish that I had because it was blurry.  Sigh.  But, that’s not the point. Later, my sister texted me and said that she forgot to tell me something…

On her way out, she passed a couple that had been watching us. And, as she passed, the woman was turning to her husband and said “Ok, I’m ready.” He looked at her and asked, to clarify, “To adopt?”

Now, in my version, they then hugged passionately while music that only they could hear played. But, the fact is, Monica doesn’t know what happened next because she kept walking. But, what she did hear was pretty awesome!

But, on this day, it looks like we inspired a family to actually take action. Wow, just wow.

Dear people that I never met and would never recognize (because, you know, I never met you…), I wish you the best. I hope you adopt and change a child’s life, as well as your own. And, I hope you all live happily and crazily ever after like we are. And thank you for putting the cherry on the top of my birthday sundae! Ok, I didn’t have a birthday sundae, but still cherries are cool.

I’m not saying that the idea of meeting #steveBurns at #megscon was the reason that I finally went back to the gym but I’m not saying it wasn’t …🤪🐶
Talky Toaster is by far the silliest cat we have ever had (and we have a lot to compare her to!)
This little nugget is 16 today!! I absolutely can’t wrap my mind around it. Happy birthday, Antwan! We love you so so much!
Finally one I relate to. 🤣
Sunday morning
When you’re son cleans his room and you get the answer to the question of “where the BEEP did all of our silverware go??”