Skip to content
I’m in a transracial adoption group on facebook.  Unfortunately (and ironically),  I don’t have much in common with them.  The focus is more on the negative aspects of adoption while I’m more into celebrating the positive.  That’s kind of my thing. 😉   I mean, no one knows more than I that adoption (from foster care, especially) comes with baggage.  But, there is a lot of beauty in it, too.  Anyway, after learning the lesson of keeping my mouth shut when I don’t agree (they don’t like that, haha) and learning how to wade through some of the irrelevant to me posts; I have gained some insight on a few things.  Like, I don’t offer up too much information to random, curious people, anymore.  Because, it’s true, it’s not just my story.  Sometimes, I’m more successful than other times.  But, I’m working on it. 🙂

The other day, I got into a conversation in the grocery store with a teacher from William’s school.  Clearly, this was not when I was remembering to censor myself, ha.  It was pretty basic, though.  I just commented that William was the name that we had wanted to name our child and it was pretty cool that it was already his name.  This, of course, led to questions from the kids that I tried to effectively field as I pulled hot pockets out of the freezer section.

So, between that and the facebook group, it got me thinking.

The topic of name changes has come up in the group, more than once.  The majority of people are against it.  The general opinion is that it takes the children’s identity, rights, etc.  There’s a lot to be said for respecting a child’s past, but, personally, I don’t think that there’s necessarily anything wrong with cherishing the child’s future.  We have four children and made four different decisions on names, based on four different children.

William and Antwan.  They came into our lives, together, and with those names.  Since Brian and I named our future children – William and Lizzie, years ago; William was a no-brainer.  Then there was Antwan.  Truth be told, we never would’ve picked that name.  It doesn’t fall into the traditional English name category that we go for.  Having said that, I now love his name because I love him and he is all Antwan.  And, yes, he went through a phase of wanting to go by his middle name, instead, and, no, NOBODY can spell it right; still I think that he likes it, too.  I hope so, anyway.  And, out of respect for William, we didn’t consider changing Antwan’s name.  We could’ve gotten away with changing a 12 month old’s name, I think, but confusing his 5 year old brother with another change?  That was too much.   (We found out later that the boys were kept separated, despite the fact that they were in the same foster home.  So, they basically had no relationship before coming to us.  But, that’s a whole other sad topic.)  We did, however, change their middle names because my family has a little matching letter names tradition.   It started with my parents (I’m Emily Eileen.) and my sister and I continued it.  So, William became William Wesley and Antwan became Antwan Alexander.  🙂

When Lizzie showed up, she was not Lizzie.  But, since she was an infant, it was an opportunity to have complete control over her name, so she became Elizabeth Eileen.  I see it as giving her an identity, not taking one away.  She loves her name and uses it often.  Particularly, when I hear her narrating her football triumphs (her brothers have “infected” her, ha).   “Lizzie catches the ball, Lizzie runs.  Lizzie got a touchdown!”  🙂  Saying her name makes me happy.  And, for us, putting a face to the name that we picked 11 years ago is just awesome.

Then, finally, Kaleb.  All bets are off with a teenager.  Changing his name just wouldn’t make sense  (unless it was his idea).  I did, however, drop several hints that I would like him to have a “k” middle name.  The hints were ignored and his middle name stayed the same.  That makes me sad when I allow myself to dwell on it (which I don’t), but that’s my issue to deal with, not his.  At his age, he did identify greatly with his name and, well, it suits him, anyway. 🙂

Anyway, when I read all the posts about the selfishness of name changing, I did worry a bit.  That is until I got Antwan’s take on it.

After hearing the conversation in the store and, also, realizing that William has Brian’s middle name and Lizzie has mine, he was unhappy.  He said that it wasn’t fair and he wanted to have one of our middle names, too.  I tried to explain how we were doing the double initial thing and, even though, it was a cool idea that we change his name to Antwan Wesley, he had a really cool name now.

Then, it hit me.  Antwan’s identity was important to him.  But, he wasn’t feeling stripped of anything, he only wanted to identify even more.  Sure, there is a primal wound that he will deal with, and, yes, he will struggle with the missing pieces of his past, but, for now, he wants to be as connected to his family, as possible.  That’s us.  And, God knows, I couldn’t feel more connected to him.  Even though, I’m not changing his name to Emilio to prove it. 😉

So, maybe, we’re different than other adoptive families.  Maybe my kids are unusual in their reactions and we’re just all-around, more well-adjusted than the rest of the adoptive family world.  Nah.  I mean, sure, there is a serious lack of representation of transracial, cosplaying families at DragonCon, but, beyond that, I don’t think that we are that different.  🙂   I think that it’s ok to name your child whatever the heck you want (while taking relevant factors into consideration, of course) because it’s your child.  And, it’s ok to want your child to have your name and be as connected to you, as possible.  Because, again, it’s your child.  No, it’s not to cool to shrug off the past and pretend that your child doesn’t have their share of inner turmoil.  But, adopting a child shouldn’t come with qualifiers.  A name is an identity and my kids have an identity, they are ours, they are Parkers. 🙂 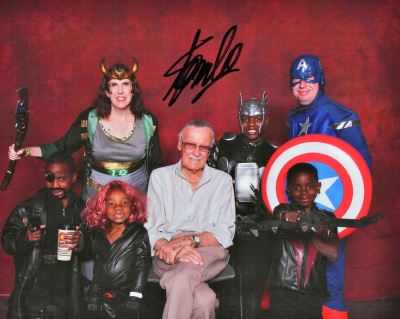 35 thoughts on “Is It Wrong To Change Your Child’s Name?”