Skip to content
This is not my typical blog post,  but when I was asked to share a video and blog post about a family who adopted a teenager from foster care, it was a no-brainer.   Out of the 104,000 children in foster care who are waiting and hoping to be adopted, 33,000 of them are teenagers.  That’s a lot.  Teenagers make such a big population of kids who need to be adopted, and, sadly, they are also among the least desirable candidates.  They have become less desirable simply because they had the audacity to get older.

Teenagers don’t really have good reputations.  They are dealing with hormones, the angst of growing up, and just trying to figure it all out.  So, they can be moody, dishonest, impulsive, and, did I mention, moody?  😉  It’s hard to be a teenager.  It’s hard to feel like you know everything in a world that knows that you actually don’t know a darn thing.  It’s even harder for teenagers in foster care.  They are trying to figure it all out and deal with the fact that they don’t have a permanent home and a forever parent.  There are many wonderful foster parents out there, of course.  But, foster care is only foster care and not permanent; nor is it supposed to be.

So, why don’t people adopt teenagers?

Some people worry that at a certain age, kids are “ruined.”  That’s exactly what I was told once.  I didn’t believe it then and I don’t believe it now.   It is true that teenagers might have more issues.  They’ve had more time to collect their issues, but they’ve also had more time to wish that they had a family.  We’ve had the opportunity to get to know our kids’ older (biological) teenage brother who is currently in foster care and after only a few visits with him, he has blossomed.  He has let us in and his whole outlook has changed.

Some people worry that you can’t form a connection with an older child.  But, I know that’s not true.  I feel very bonded to my kids’ brother.  At first, yes, he had a wall around him.  But, once he opened a door for us, it was open and there was no turning back.

Some people worry that it’s hard to start with an older kid. And, you know what?  It is.  They come with their collection of baggage and issues.  They’ve come with the expectation that you will let them down.  So, yes, they might be a little more work.  Therefore, they don’t deserve a chance to be loved and to be happy?  I never met a parent of any child, of any age, who thought it was easy, anyway.

Some people worry that they’ve missed all the exciting firsts.  Yes, they have already had a bunch of firsts.  But, they haven’t had firsts with you. And, in many cases, the firsts that they had were kind of lousy.  So, it’s an awesome chance for a do-over for everyone.

As I get to know my kids’ brother more and more, I’m excited that he’s going to be part part of our family, one way or another. And, I know that starting with a teenager is not the same. He’ll most likely never run into my arms like the little ones do and I’m pretty sure that he won’t curl up on my lap.   But, he still needs hugs. And, feeling him relax his body and let me squeeze him hard for the first time was pretty awesome.   He’s not going to dance with me to silly music (at least not without some sort of bribe), but he has been known to walk around the house singing songs and, before long, the rest of us end up joining in.

Yes, definitely worth it.

So, this blog post and video are about the Dickey family who opened their hearts to a teenage girl and have no regrets.

Please take a few minutes to read this blog post and then watch the video from the U.S. Department of Health and Human Services, AdoptUSKids, and the Ad Council’s Adoption from Foster Care.  It made me teary eyed.  🙂

My Life with Brittany How I became a “perfect” parent to a teen.

Two and a half years ago, an extraordinary young woman entered my life. When I first met Brittany she was 13 years old. It was clear that she had great potential, but she hadn’t received enough love. She got along with my two sons, and we could tell that she would make a great big sister.

My husband Travis and I decided to adopt a teenager because we wanted to give back. We wanted to provide a child with a loving home and a supportive environment for the rest of his or her life. We’re not super wealthy or a perfect family, but I’m a pretty good mom, so I thought that it was something I could do. I spent weeks on the AdoptUSKids web site looking for the right addition to our family. Since we already had two young boys, we thought it might be good to have a girl and in a different age category. Travis joked that if we adopted a teen, at least we would know who we were getting; her personality would already be formed.

When we first adopted Brittany, she certainly had a lot of personality, but at the same time, she had a lot of room to grow. She was just about to start 7th grade and was probably on about a 4th grade level academically. We got her tutors, and her dad worked with her a lot. She worked hard in 8th grade too, and when she went to high school she was recommended for honors Biology and honors Math.

You may think that you can only experience milestones when you adopt babies and toddlers, but that’s not true. Brittany was a tomboy when she first came to live with us. Since then, she’s made the cheerleading team and won Miss Congeniality. There have been so many other “firsts” we’ve shared: Brittany’s first hair highlighting, her first school dance, first kiss, first date (parent chaperoned, of course), first day of high school, first high heels, first back hand-spring, and first time crying tears with a parent there to provide comfort.

We’ve had some challenges with Brittany, of course, but nothing outside of the ordinary. She’s fun and chatty and a little sassy sometimes. After all, she is a teenage girl! And now, I can’t imagine my life without her.

“Did you know that there are more than 33,000 teens currently available for adoption from the U.S. foster care system? ”You don’t have to be perfect to be a perfect parent” to a teenager.* You don’t have to be rich or married; you only need to provide a child with love, patience, stability, and a healthy environment so they can succeed.

Want to learn more? Visit adoptuskids.org or call 1-888-200-4005 for English-speaking staff or 1-877-236-7831 for Spanish-speaking staff, to receive current, accurate information about the foster care system and the adoption process.” (From Paige Dickey’s post)

About Paige Dickey
The Dickey family is a Caucasian, two-parent household. The Dickeys have three children; Brittany (15), Walker (10), and Conner (8). Brittany was placed with the Dickey family in September 2010 and the adoption was finalized in April 2011.

*“You don’t have to be perfect to be a perfect parent,” is the slogan of the U.S. Department of Health and Human Services, AdoptUSKids, and the Ad Council’s multimedia public service advertising (PSAs) campaign that encourages the adoption of children from foster care. PSAs have been developed with a specific annual focus, including teens, preteens, Spanish language, African-Americans, sibling groups, and children 8 and older.” 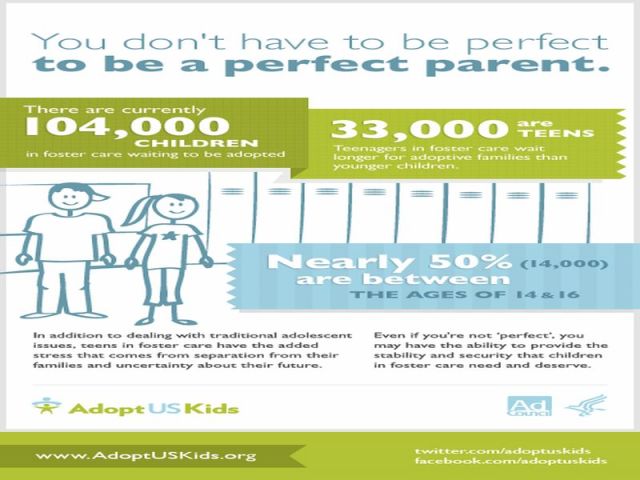 17 thoughts on “Teenagers Need Homes, Too.”