Skip to content
I think that I’ve figured out one of the main issues with Kaleb and me.

When you have kids, one of your biggest obligations is to teach them how to effectively live in this world.  How to be a good person.  How to cope with those that aren’t.  From the beginning, we’ve taught Lizzie, Antwan, and William how to consider people’s feelings, respond kindly, and do the right thing.  For the most part, it’s worked.

When Lizzie tells Antwan something, he will respond with “That’s cool, Lizzie.”  (Instead of ignoring or announcing that he knew the information already.)  When he doesn’t like something that I give him to eat, he will say, “Thank you for making this Mommy, I just don’t really like it.  (Instead of crying and shoving it away.)   I’m most proud of that one because Antwan is like me when hungry.  Awful. 😉  William had lunch with a student with Autism at school, last week, when the other kids shunned him.  (There are no words for how proud this makes me.)

They are not perfect, but they honestly try to be good people.  Most of the time… 😉

Then, there’s Kaleb.  Now, I’m not saying that he’s a bad person.  Far from it.  But, he’s certainly not looking to be taught the ways of the world from his loving mom and dad.  He thinks he knows better than Brian and he thinks that I’m a total idiot.

Why do I think that he thinks that I’m an idiot?  Here’s why.

Now, I was in the middle of something, something stressful, and I took the low road and said, wearily, “I don’t know.”

At this point, Kaleb turned around, looked, and said, “Oh, I thought you were, Daddy.  It’s ok, Mommy, I didn’t expect you to know.”

The worst part was that he wasn’t being rude.  He was just being sincere.

Of course, I did know and I’m not an idiot.  But, that is what he thinks.

I’m told that this is normal.  But, it kind of sucks.

So, as we try to teach Kaleb how to live in this world, be a good person, and everything else; he just tries to prove us wrong.  Because he knows better.  Sometimes, I continue to argue my point.  And, sometimes, I give up.  But, when I give up, I know that means that I’m doing him a disservice.  He is going to struggle in the world and he’s going to teach the younger three bad habits.

On the way home from band.

Kaleb -“People shouldn’t ask me questions if they don’t want me to tell them the truth.  A girl sat by me and asked me who was prettier.  Her or another girl.”

Me – “Please tell me that you didn’t say the other girl.”

This led to yet another conversation about the difference between lying and saving people’s feelings.  (We’ve had this conversation, each time that one of his little brothers or sister have asked him a question like “Do you like my new socks?”)  This came with the added topic of how insecure teenage girls are.  Because, they really, really are.  I would know.

Sigh.  I sigh as I write, I sighed as I talked.

Then, there’s our conversation, last night, about sharing his items in the video game.  Yes, he got to the special place in the game world, first, and, yes, that means that he got everything for himself; but the right thing to do is share.  Don’t forget that you’re playing with younger kids.  (It’s not fair!  It’s not fair!  I got them first.  I share all the time.)

“Be the bigger person.”

I think that’s when he left the room.

He does do nice things.  He does share.  He, sometimes, goes along with my directions like saying “That’s cool” when Lizzie shows him something that she thinks is cool.  But, I always feel like he’s just appeasing me.  Just trying to keep ticked off Mommy at bay.

I’ve often heard that when kids get to their teenager years, it’s “too late.”  Well, I know that can’t be true.  It just can’t be.  But, I, also, know that if he doesn’t want to be taught, he won’t be.

So, there you go.  I know what the problem is.  And I know what bothers me. I’m just fuzzy on what to do about it.

I guess for now, I’m just going to just stick to that whole keep trying thing. 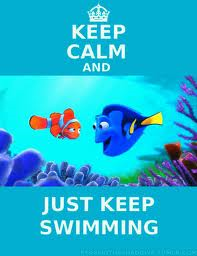 39 thoughts on “How Do You Teach Someone Who Doesn’t Want To Be Taught?”

How’s that for some Sunday wholesome?
If you know you know!
Fun little transition courtesy of @sewgeekmama !
I’m not saying that the idea of meeting #steveBurns at #megscon was the reason that I finally went back to the gym but I’m not saying it wasn’t …🤪🐶
Talky Toaster is by far the silliest cat we have ever had (and we have a lot to compare her to!)
This little nugget is 16 today!! I absolutely can’t wrap my mind around it. Happy birthday, Antwan! We love you so so much!